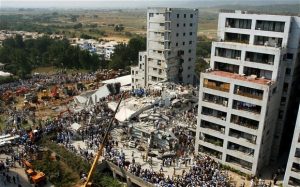 Seventy-one-year-old architect Shaikh Abdou Hafeez was arrested on August 11 on the Greek island of Zakynthos. The architect, who has both British and Pakistani nationality, is charged with the death of 78 people and injuring 84 others after a building collapsed in Pakistan in 2005.
For his arrest an international warrant had been issued on the charges of homicide, damage of  public property, corruption and other offenses.The building which was supervised by the architect collapsed after an earthquake. The earthquake which had a magnitude of 7.6, killed about 50,000 people in Pakistan.
The architect was found and arrested two days ago at the State Airport of Zakynthos in the Ionian islands during the usual passport check. He was finally taken to the Prosecutor of Zakynthos.