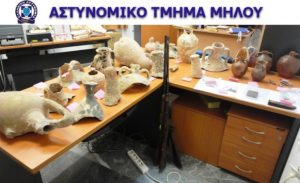 Two brothers, 37 and 38 years-old were arrested and accused on August 4 on the Greek island of Milos for violation of legislation on the Protection of Antiquities and Cultural Heritage and for illegal possession of weapons, firecrackers and drugs.
Investigations were conducted by the Milos Police Department in a food service operation and two homes owned by the defendants, where the following antiquities were found:
Two jars without necks and handles, ten parts of amphorae (neck-body-handles), Three bases, three sherds of amphorae, four jars of glaze, two vases, one missing jar segment, a vase handle, two non-functional muzzle naval rifles, a non-functional shotgun, ten different calibers, a full cartridge caliber of 7,62 mm, nineteen crackers and small quantities of raw hashish.
The artifacts estimated to belong to the Roman-Byzantine period are being kept to be examined by archaeologists.