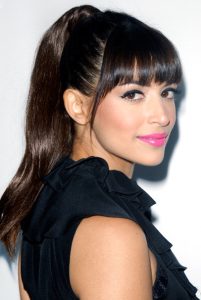 “New Girl” star Hannah Simone has joined the cast of the upcoming comedy “Flock of Dudes.”

The actress, who has Greek-Cypriot roots on her maternal side, joins Jeff Ross, Marc Maron, Skylar Astin, Jamie Chung, and Ray Liotta in the film about a man who breaks away from his best friends so he can grow up. “Flock of Dudes” is the feature directorial debut of Bob Castrone, mostly known for his work on shorts and TV series, including “The Burn With Jeff Ross” and “Playing with Guns.”

Simone has a recurring role on the FOX television series “New Girl” as model Cecilia “Cece” Parekh. In an interview with Men’s Health, the stunning actress told the magazine that “makaronia tou fourno” is her “total weakness,” and that having the delicious dish – made with minced pork, red wine, mint, cinnamon, nutmeg, and haloumi cheese – reminds her of Cyprus.

“Flock of Dudes” is currently filming in Los Angeles and scheduled for release in 2014.