Rybolovlev Dressed up as Ancient Greek 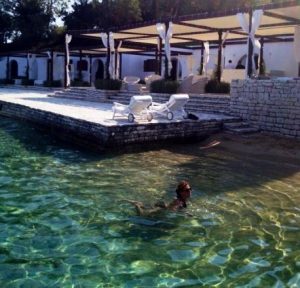 A luxurious party was held on the private island of Skorpios in the Ionian Sea, located off the western coast of Greece and just to the east of the island of Lefkada.
Skorpios is mainly known as the private island of the late Greek shipping billionaire Aristotle Onassis. His granddaughter, Athina Onassis Roussel, sold the island in April 2013 to Ekaterina Rybolovleva, the daughter of Russian billionaire businessman Dmitry Rybolovlev. The nearby islet of Sparti was also included in the sale. For the history, the Greek Government is yet to confirm the legality of the purchase by the Russian oligarch.
Eventually, the notorious party for which much was written in the last days was nothing more than a night for two, a gift from the Russian tycoon to his girlfriend. Those who were there to organize the party were left speechless from the opulence of the event.
In a setting taken from ancient Greece, Rybolovlev and his girlfriend were dressed up like ancient Greeks and the staff who served them was sitting on a couch based on …Caryatids.
According to lefkadapress.gr, there was a huge heart made from white and red balloons and on the beaches of the island the sun loungers had towels with the name ANNA written on them.
Two couples of dancers from Lefkada performed Greek traditional dances and in the end the well-known Greek singer Kostas Karafotis sung his hits to entertain the Russian couple. According to the same source, the organizers of the party asked a number of Greek singers to come to Skorpios and sing for the night, such as Yannis Parios, Yannis Plutarchos, Peggy Zina, but they could not go.

Greek health authorities announced on Monday that the benefits of the AstraZeneca vaccine against Covid-19 far outweigh the risks associated with thrombosis.
Greece