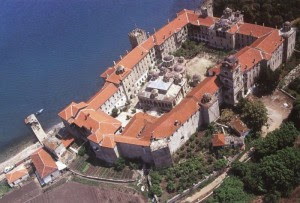 According to information, there has been unrest in Mount Athos since the night of July 17, as police forces with two patrol cars are outside the Esphigmenou Monastery.
The tension began after the evacuation of the Holy Monastery that was ordered by a bailiff. The command was given to start projects funded by ESPA and caused the reaction of the monks of the Esphigmenou Monastery.
The Monastery’s press office issued an announcement-appeal for help, “Today we were served mandatory evacuation of our delegation building in Karyes (building B). We will not leave our haunt just because the new fraternity wants to justify European funds. We will never leave our haunt to those who were baptized with the name New Esphigmenou Monastery against the Charter of Mount Athos.
The Esphigmenou Monastery is an Eastern Orthodox monastery in the monastic state of Mount Athos in Greece, dedicated to the Ascension of Christ. It is built next to the sea at the northern part of the Athonite peninsula. Located near the Hilandar monastery, it is the northernmost of all Athonite monasteries. The current monastery dates back to the 10th century, while tradition holds that the site was used as a monastery since as early as the 5th century. Esphigmenou ranks eighteenth in the hierarchy of the Athonite monasteries.