Region of Crete Gets Green Prize 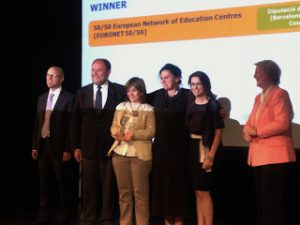 The Region of Crete continues with the participation in the new project Euronet 50/50 max, in which a total of 13 European countries, Greece included, aim at saving energy at 100 schools, as well as six additional municipal buildings in Crete, through the change of users’ daily behavior.

“We are very pleased with this distinction-award of our Region in Brussels and we continue our action with more schools, where the children experience and understand in practice what energy saving is,” the District Commissioner of Crete, Stavros Arnaoutakis stated.

“This distinction belongs to all those who worked with will and enthusiasm, both to the headmasters and to the teachers, but most of all to the students for this successful effort, which is an example and guide for our new project,” Arnaoutakis added.

The District Commissioner said that the project’s actions were not just successful, but they were top in Europe in the domain of energy saving and were awarded by the European Commission, winning the first prize in the European Competition of Sustainable Energy 2013, in the category of Education.

One of the most prominent philhellenes of all was Dr. Samuel Gridley Howe, who wrote about the many horrors that took place during the War
Greek News