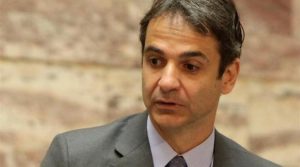 The mobility scheme for public servants will proceed “even by force, if necessary,” the new Administrative Reform Minister, Kyriakos Mitsotakis said according to the German magazine Focus.
Focus creates the portrait of Mitsotakis and presents the challenges he faces in the expanded public sector.
“No one should be jealous of this man. While Kyriakos Mitsotakis is negotiating with the Troika on the sixth floor of his ministry, the protesters are screaming on the road. The representatives of the Troika are asking for more cuts, while the protesters are clearly opposed,” the magazine reported.
Focus mentions that the 46-year-old minister is the “former manager of the top consulting firm McKinsey, who was proclaimed the Leader of Tomorrow in 2003,” and is called to have reduced by 2016 the expanded public sector by 100,000 positions. However the magazine maintains he won’t consent to more dismissals than those agreed with the representatives of the lenders.
Also, the new minister clarified that the public servants should be judged on their performance and not on their kinship with political figures.
When asked why he agreed to sit on the “electric chair” of the Ministry of Administrative Reform, Mitsotakis responded,  “I lose money from politics, but I want to serve my country.”
His response was commented by the journalist, “Such passionate words are not used for a political class, that until recently was only known for how it was trying to get rich.”
Mitsotakis refutes that he stated to the German magazine that the mobility scheme will be accomplished even by force.