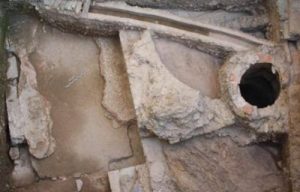 Michael Cosmopoulos, Professor of Archaeology and Chair of Greek Studies, University of Missouri-St. Louis, returns to the historic village of Iklaina where with his excavation he brought to light, in the summer of 2010, the oldest written text of Europe on a tablet made of clay.
Iklaina is located in the municipal unit of Pylos, Messenia, Peloponnese, Greece. Important archaeological remains of the Late Bronze Age (ca. 1600-1100 BC) period were discovered in Iknlaina through excavations and surface survey by the Athens Archaeological Society and the University of Missouri–St. Louis under Cosmopoulos’s direction.
The finds include an early Mycenaean palace, giant terrace walls, murals, an advanced drainage system, and a clay tablet from between 1450 and 1350 BC featuring an early example of Linear B writing. Other periods represented are the Late Classical and the Byzantine.
Currently, Cosmopoulos directs three major field projects in Greece: the Eleusis Archaeological Project, which studies the origins of ancient Greek mystery cults; the Iklaina Archaeological Project, which investigates the origins of federalism in ancient Greece; and the Oropos Survey Project, which explores the rural history of ancient Greek city-states.
For his research accomplishments he has been awarded the Canada Rh Award for Outstanding Contributions to Scholarship and Research in the Humanities.