In Vienna, Samaras Says All Is Well 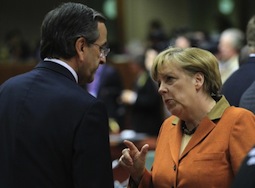 With his fragile coalition on the verge of breaking up over his decree to shut down the national broadcaster ERT without consulting his partners or the Parliament, Greek Prime Minister told European Union leaders during a lightning visit to a meeting in Vienna on June 20 that everything was fine in Athens.
Samaras was seen talking with German Chancellor Angela Merkel, whose country is footing much of the bill for bailouts and has insisted on unrelenting austerity measures in return. She said she had nothing to do with ERT’s rapidfire closure although backing firings of public workers.
“Greece has covered a lot of ground, making progress every day,” Samaras told reporters on arriving at the summit, adding that the country was going through a “difficult period, which demands fiscal stability and reforms as well as strong and broad social and political consensus.”
During a break from the summit proceedings, Samaras is said to have met with Merkel, who reportedly encouraged him to continue with economic reforms agreed with the country’s foreign creditors – the Troika of the European Union-International Monetary Fund-European Central Bank (EU-IMF-ECB.)
He had only a short time in Vienna as he had to rush back to Athens for a crucial meeting with his reluctant partners, PASOK Socialist leader Evangelos Venizelos and Democratic Left (DIMAR) chief Fotis Kouvelis who opposed his move on ERT.
A senior IMF official rebuffed reports that the controversial decision by Greece’s conservative-led government to close state broadcaster ERT last week had been recommended by the agency. “The recent decisions regarding the state broadcaster have been the government’s,” IMF spokesman Gerry Rice said.
“The authorities’ economic program is supported by IMF lending and that includes a reform of public administration … but does not make specific recommendations on decisions involving state companies,” he added. European Monetary and Economic Affairs Commissioner Olli Rehn made a similar statement last week, saying that the EU had not influenced the ERT decision.