Electra Getting Ready to Hit Studio and Record Debut Album 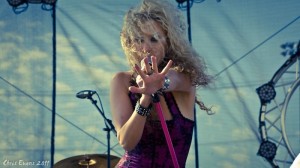 After playing the L.A.-club circuit for the past three years, Electra Barakos and her band, Electra, are heading into the studio to record their debut album.

Leaving Athens to head to Hollywood and fulfill her dream of becoming a musician, Electra’s parents left everything behind in Greece to join her in the States. Forming a band described as “pop/rock with a classic twist,” the singer’s father, Yanni, joined as bass player. Other members are Dan Welby on drums, Hyland Church on guitar and Ezequiel Dobrovsky on keys.

With the popularity of crowd funding, Electra began a Kickstarter campaign in hopes of raising enough money to get into the studio this month and release an album in the fall. Recording costs can range anywhere from $5,000-$50,000+ for studio time, and the people behind-the-scenes that go into making an album, like producers and engineers. The band is well on their way to reaching their goal, so look out for their debut album and visit the funding page for a free download of their song, “Life’s a Bitch”: http://www.ElectraKickstarter.com

And check them out performing the song at the Canyon Club in L.A.: