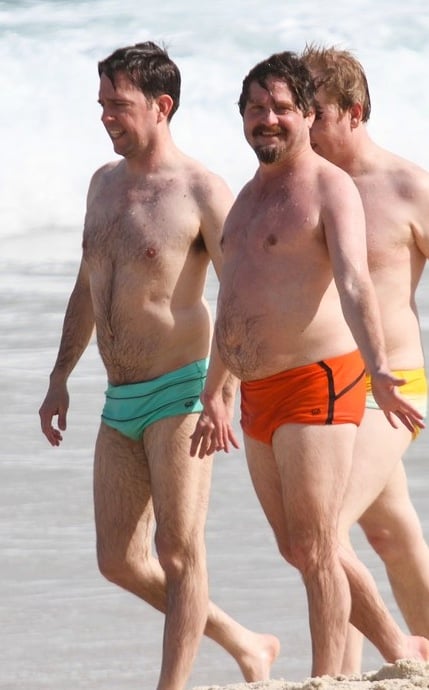 The Hangover crew is touring the world to promote the final film in the comedic franchise, and while making a stop in Brazil, they all got together for a beach day in Rio de Janeiro.

Zach Galifianakis and Ed Helms, who both star in the film, wore itty bitty bathing trunks, leaving little to the imagination. Galifianakis, who recently shaved his beard down to a goatee, sported an orange suit, while Helms wore a very similar mint green one.

Justin Bartha and Bradley Cooper, on the other hand, were more covered up during the outing, strolling the beach in t-shirts and knee-length bottoms. The film’s female star, Heather Graham, also joined the boys in the ocean for a swim, along with other friends in the group who were enjoying a little bit of the Rio sunshine.

The Hangover: Part III came in second (Fast & Furious 6 was first) at the box office over Memorial Day Weekend, earning $42.1 million dollars domestically. Part III focuses on Galifianakis’ character, Alan, as his best friends come together to help him deal with his father’s passing.

Check out more pics from The Hangover hangout in Brazil here.