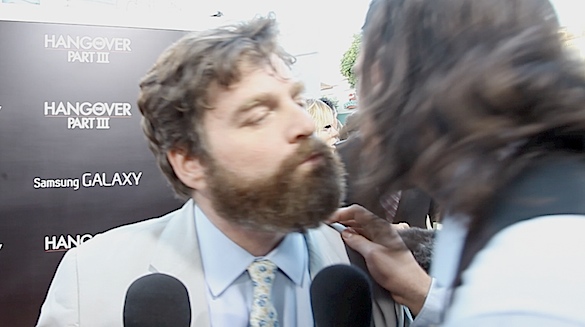 We met Zach Galifianakis at the premiere of his latest film, “The Hangover: Part III” and asked him questions he would have asked if he was a guest on his famous online show “Between Two Ferns.” It is tough to stay serious around Zach and we couldn’t be the exception. Watch the interview and our Greek kiss below:

Greek-American comedian Zach Galifianakis was born in Wilkesboro, North Carolina. His mother, Mary Frances (née Cashion), ran a community center for the arts, and his father, Harry Galifianakis, was a heating oil vendor. Galifianakis’ paternal grandparents emigrated from Crete, Greece, and Galifianakis was baptized in his father’s Greek Orthodox faith.

Galifianakis’ career began on television, when he played the recurring role of a stoner named Deuce in the short-lived sitcom “Boston Common.” Then he joined “Saturday Night Live” as a writer but lasted only two weeks. Galifianakis co-starred in the film “Out Cold” and had small roles in “Corky Romano,” “Below,” “Bubble Boy,” “Heartbreakers,” “Into the Wild,” “Super High Me,” “Little Fish Strange Pond,” and “Largo.” He had his own episode of Comedy Central Presents, which first aired in September 2001. Galifianakis gained stardom when he co-starred as Alan Garner in the hit comedy “The Hangover” and earned the MTV Movie Award for Best Comedic Performance. Following “The Hangover”‘s release, Galifianakis was prominently advertised in subsequent films that featured him in supporting roles. These included “G-Force,” “Youth in Revolt,” and the Oscar-nominated film “Up in the Air.”