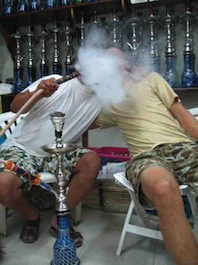 While the economic crisis is still taking its toll on Greece, the capital city of Athens is at the center of the whirlwind. Poverty and unemployment, hunger and homelessness have increased in Greece the last few years bringing new problems with them. A new cheap drug out on the market called shisha or “austerity drug” is growing so popular among homeless people and substance abusers that not only does it make users more violent and mindless, but also sexually promiscuous and careless.

A Guardian report from Athens sheds light on how extensive the problem really is: “The drug of preference for thousands of homeless Greeks forced onto the streets by poverty and despair, shisha is described by both addicts and officials as a variant of crystal meth whose potential to send users into a state of mindless violence is underpinned by the substances with which the synthetic drug is frequently mixed: battery acid, engine oil and even shampoo.”

The deadly drug is a favorite among poor substance abusers and homeless costing only two euros per shot. It is an easy to make drug, which allows it to spread like wildfire. Expensive drugs including heroine and cocaine are hard to find nowadays in Greece due to the ongoing crisis, which made dealers turn to synthetic and cheaper forms of addiction products that can be sniffed or injected.

The UK daily also refers to other side effects of the crisis, such as the increased rates of alcoholism, depression, suicides, crime, prostitution and HIV infections. The crisis and austerity measures imposed by the EU/IMF/ECB leave little hope that such problems can be mastered without funds and staff.

Transmission of Covid-19 has skyrocketed in Greece once again, as the country recorded a stunning 2,147 cases on Tuesday.
Food