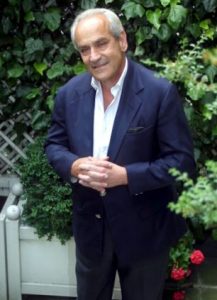 According to the Daily Mail, Greek shipping tycoon Demetri Marchessini has donated 10,000 Great British Pound, some $15,170 to the Independence Party, about 20 percent of its entire amount received from contributors.

According to records from the Electoral Commission, it is the first time that the 78-year-old has given money to a political party.

Marchessini gave UKIP 5,000 GBP in February and another 5,000 in March as the party was getting ready for local elections. He said that women who wear pants instead of skirts are “deliberately” making themselves unattractive to men.

He is the author of a book which goes under the title Women In Trousers: A Rear View, in which he took photos of clothed women’s rear ends and commented on them and said that he found that the ratio Britain of women wearing trousers to skirts is 10 to 1.

He said he believes there are so many women who would look lovely in dresses or skirts but choose to look unattractive wearing trousers but he didn’t explain why.

The newspaper said that in an interview over the promotion of his book, Marchessini was asked if he was pleased at the rise of curvy stars such as Jennifer Lopez. But, he was quoted as saying to The Guardian that “She looks like a Mexican tart.” His ex-wife Lucinda told reporters that he is deeply sexist.