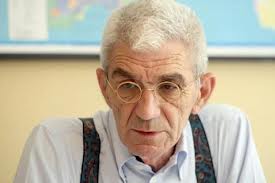 The Mayor of Thessaloniki Yiannis Boutaris talked in an interview in the radio station Palmos 96.5 and said he supports the Gay Parade in Thessaloniki but not the neo-Nazi Golden Dawn party that has 18 seats in Parliament.
“I have repeatedly said that the Golden Dawn should not be in the Parliament. This party is a disgrace for the Greek society. The fact that this party is third is indicative of the abjection of the Greek society,” he said.
He added that, “Golden Dawn surpasses the dictatorial beliefs. It’s a criminal organization. Those who support the Golden Dawn are individuals with an extremely low educational level”.
Regarding the Gay Pride that is coming in Thessaloniki in June, gay marriage and the adoption of children by gay couples he stressed: “I do not have any right to prohibit the freedom of expression. Gay Pride is a series of events and is an honor for the city of Thessaloniki. The gathering of 5,000 gays and lesbians will have an impact on the city’s tourism”.
When asked if he would marry a gay couple, he replied: “I would not have any problem whatsoever,” and he added that “if adopted by the Greek Parliament I have no problem to do it.” He also said that, “Of course I am positive about the adoption of children by gay couples”.

A tiny islet off the coast of Attica near the Kaki Thalassa area has such a shape that it gives the impression it features a swimming pool.
films

A group of Greek volunteer mechanics went to Evia fix vehicles that were heavily damaged in the flood in August of 2020.
Ancient Greece