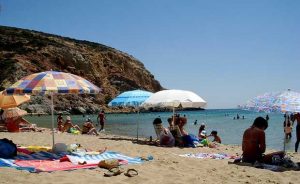 According to the American website Price of Travel, three Greek islands were included on the list of the fourteen cheapest beach destinations in Europe.
The Greek island of Kos ranked fifth, as according to the website, “The hotels in Kos are generally affordable and offer good value.”
Milos was listed sixth for its excellent beaches. “Another advantage of Milos is that it’s one that is best reached by a 3-hour ferry ride from Athens, making it quite easy to combine a short visit to the capital and a sunny and low-key beach stay,” Price of Travel wrote.
You can find Rhodes in the eight place. Rhodes has close to 500 hotels, but generally specializes in the lower price ranges. Many Brits, Germans, Italians, and Scandinavians choose the island of Rhodes, as there is a satisfactory number of cheap nonstop flights from most major cities in their countries. Rhodes is also popular for its archaeological sites and its well preserved medieval town. But if you just want sun and sand at a package hotel, you won’t have trouble finding it.
Ulcinj, Velika Plaza in Montenegro topped the list followed by Sunny Beach in Bulgaria, Sarandë in Albania and Mamaia in Romania.