The Economic Assassins Who Killed Cyprus 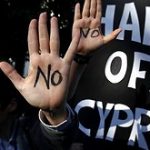