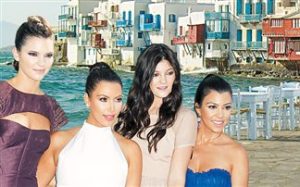 The Kardashian family, well known for being well known, is coming to Greece and plan a big stay on the party island of Mykonos. Thema People reported that the family will come with an entourage of 50 people.

While their TV crew will stay in a hotel, the 18-member family will stay in villas in the area of Aleomandra and have ordered the surrounding streets shut down to protect their privacy.

They said they will tour the island as simple tourists, except for the TV crews and hordes of people following and gushing after their every move and as they take footage for their celebrity show.

Their program is organized by the Mykonos Top Villas agency, which is specialized in organizing vacation for businessmen, Hollywood stars and celebrities. Its owner, Katerina Topouzoglou, caters to their needs. They will enjoy the Greek cuisine in familiars haunts, such as Nammos and the restaurant Kuzina and they will go snorkeling) at the famous Psarou beach. Their program also includes an excursion to Santorini, a voyage to the island of Dilos and of course a picnic on the island with the backdrop of Cyclades and the sea.

Their activities will take place during the day, and they will avoid night outings. Locals hope to catch a glimpse of them during night walks after dinner at Matogiannia.