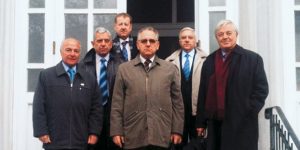 The Greek population of Istanbul, which was rather forced to leave Turkey because of the sociopolitical situation, is now asking for its citizenship rights’ restoration, Sunday’s Zaman reported.

Greeks in İstanbul, known as Rums (Turkey’s Greeks), are finally given the chance to actually voice their demands thanks to recent improvements relating the minorities’ rights. Talks have been carried out with government officials through the İstanbul Rums Universal Federation, established in 2005.

The federation, after sending a letter to Prime Minister Recep Tayyip Erdoğan addressing their problems and demands, also sent a written statement to the Foreign Ministry and the Ministry of EU Affairs in September, 2012. The federation’s head, Nikolaos Uzunoğlu, presented a number of suggestions, among which were granting quick Turkish citizenship to people who would like to return, giving them orientation classes in order to help them open up small businesses and learn Turkish.

In the beginning of March, Deputy Prime Minister Bülent Arınç highlighted to his government members the importance of improving the lives of minorities in Turkey by expanding their rights, while calling minorities to return to Turkey.

According to Sunday’s Zaman’s extended article, Uzunoğlu also underlined that it is highly important for young Greeks to return to Turkey in order to keep their culture alive. That is why in a written statement presented to the government by his federation last year, was included the demand of support and encouragement for young Greeks’ returning.

Apart from the citizenship, the organization demands the return of property seized by members of the Greek minority who had to leave, providing students from EU member nations with the opportunity to enroll in Greek schools in Turkey, handing over the Rum Literary Society library to an İstanbul-based Greek organization, as well as financial and educational support for young Greeks in Turkey.