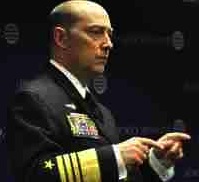 Admiral James Stavridis, the Supreme Commander of NATO forces in Europe, was honored with the Federal Cross of Merit in Berlin.

The award was established in 1951 by the first President of the Federal Republic of Germany Theodor Heuss and is the only one at the federal level. Stavridis received the Federal Cross of Merit by the German Defence Minister Thomas de Maiziere.

Stavridis noted the close cooperation of NATO forces and European Command EUCOM with those in Germany, and described the intention of German forces to host the U.S. Air Force in Europe as a “proof of this remarkable cooperation.'” He said that, “We share a common heritage and common values​​ such as democracy, human rights and the freedom of speech.”

Stavridis is a 1976 distinguished graduate of the U.S. Naval Academy and a native of South Florida. He is a career surface warfare officer and served at sea on carriers, cruisers, and destroyers. After serving with distinction as Operations Officer on the newly-commissioned USS Valley Forge, Stavridis commanded destroyer USS Barry from 1993 to 1995, completing deployments to Haiti, Bosnia, and the Persian Gulf.

The Barry won the Battenberg Cup as the top ship in the Atlantic Fleet under his command. In 1998, he commanded Destroyer Squadron 21 and deployed to the Persian Gulf in 1998, winning the Navy League’s John Paul Jones Award for Inspirational Leadership. From 2002 to 2004, Stavridis commanded Enterprise Carrier Strike Group, conducting combat operations in the Persian Gulf in support of both the successful Operation Iraqi Freedom and Operation Enduring Freedom.