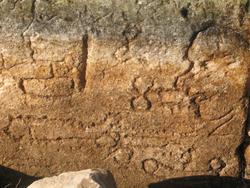 Angelos Chaniotis, the Greek professor of Ancient History and Classics in the Institute for Advanced Study at Princeton university gave a speech under the title Graffiti in the Ancient City – Images and Voices of Daily Life, on April 17 in Thessaloniki
He was invited by the Dukakis Center for Public and Humanitarian Service of Anatolia College, the American College of Thessaloniki.
Chaniotis says that ancient graffiti works are “illustrations of ancient voices and emotions on the rock” and adds that “most of them are spontaneous creations, engraved during the night by individuals in stimulation, or drunk and jolly – a fact that makes their interpretation difficult but their value, as historical sources, great. As far as their content is concerned, they are characterized of sex discriminations, sexual overtures, competitiveness, insults, sexual preference declaration, dominance and demonstration…”
The Greek professor located, collected and studied more than 4,000 ancient graffiti’s during his participation in New York University’s excavation in the ancient city of Aphrodisia, which lies in inland Caria in the Meander river basin, 230 kilometers southeast of the port of Izmir (ancient Smyrna). It is one of the most important archaeological sites of the late Hellenistic and Roman period in Turkey.
Chaniotis found thousands of graffiti examples engraved or carved on the marble which varied in content: board games, prayers, religious symbols, names, obscenities and nasty images to humiliate the opponent in case of sporting or other competitions.