The Role of Lemnos in the Gallipoli Campaign 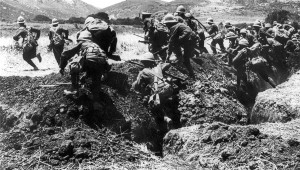 In 2015, Australia will celebrate the centennial anniversary of the Australian forces landing in Gallipoli on April 25, 1915. The Gallipoli Campaign was the first major battle undertaken in World War I by Australia and New Zealand, and is often considered to have marked the birth of national consciousness in both countries.

Anzac Day, April 25, remains the most significant commemoration of military casualties and veterans in Australia and New Zealand, surpassing Armistice Day/Remembrance Day. The participation of the Gallipoli Campaign was the beginning of forging national unity in Australia.

Preparations already started long ago, and on Anzac Day in 2015, thousands of Australians along with the political leadership of the country are expected to go to Gallipoli where the historic anniversary will be honored.

For years, Greek-Australians as well as Australian politicians and military officials have been making great efforts for the Greek island of Lemnos to be included in the celebrations of Anzac Day. Lemnos is in the northern part of the Aegean Sea. Indeed, as the centenary on April 25 is approaching, historical research is on schedule. The purpose of the research will be to demonstrate Lemnos’ important role during the Gallipoli Campaign.

Until now, most of the registered and published information concerning the role of Lemnos in the campaign is mainly about military matters and the function of hospitals on the island. The impact of the presence of the Allies on the local population has not yet been adequately studied. This research aims to the better understanding, interpretation and recognition of the role of the island and its inhabitants in this campaign, and the impact that the forces of Anzac and the Allies had on Lemnos.

Despite the fact that Lemnos is only 100 km away from the Gallipoli peninsula and that the island played a decisive role for eight months in the Dardanelles Campaign, the role of the island is almost unknown to most Australians. Although much has been written about Gallipoli, Lemnos is not mentioned at all and the passage of time has left it in the margin.

Dr John Yiannakis was born and educated in Perth, Western Australia. For many years he lectured in Modern and Ancient History at Tuart College where, from 1998 to 2001, he was also Head of the Social Sciences Department. Yiannakis has also taught History and Intercultural Studies at Edith Cowan University, as well as having worked at the Centre for Migration and Development Studies at the University of W.A. He was awarded a Ph.D. from the University of Western Australia in 1994 for his research of Greek, notably Castellorizian – migration and settlement to Western Australia.

At the present, Yiannakis is undertaking the following research project: ANZACS and the Aegean: Lemnos and its ANZAC Experience 1914-1918.