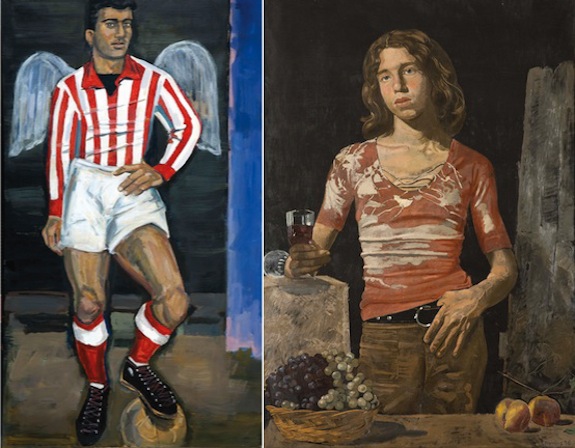 Born in the Athenian port of Piraeus in 1910, Tsarouchis, is regarded as one of the greatest Greek painters of the 20th century. During the 1930s he travelled widely, absorbing influences from Renaissance art, from Impressionism and from his friendship with Matisse and Giacometti which he fused with his grounding in the Byzantine tradition to establish a specific Greek painterly identity. Tsarouchis defined 20th Century Greek Art and is often referred to as the painter of ‘Greek people’. He was described by the Nobel Prize poet Odysseas Elytis as being simultaneously a revolutionary and a classical artist.

He drew much inspiration from the working class youth of his home town and the Greek sailors and soldiers he encountered during his service in the Greco Italian War in the early 1940s. He is now credited with having elevated his models into symbols of the modern Greek spirit. In 1967, however, he was forced into political exile by the military dictatorship which objected to the strong homoerotic content of his work. He settled in France where he met Dominic, one of his favourite male models, who is portrayed in many of his masterpieces of the 1970s including ‘The Four Seasons’ (1972) and ‘Autumn’.

The painting depicts Dominic in an allegorical representation of Autumn. Clothed in russet and brown, clutching a glass of wine and flanked by a basket of fruit and three peaches the young man stares without emotion into a space over the viewer’s left shoulder. The picture displays the artist’s close familiarity with the Western tradition – there are, for example, clear echoes of Caravaggio and Velasquez in the rendering of the basket, the fruit and the wine glass – but conveyed with a specifically Greek sensibility.

Another, earlier, work by Tsarouchis featuring in the sale dates from 1954 and depicts a footballer from the famous club Olympiacos. The player adorned with the wings of victory (a Tsarouchis trademark) is standing, foot on ball wearing the Olympiacos strip of red and white stripes – based on the Arsenal football colours of the 1920s. The work is estimated at £80,000-100,000. 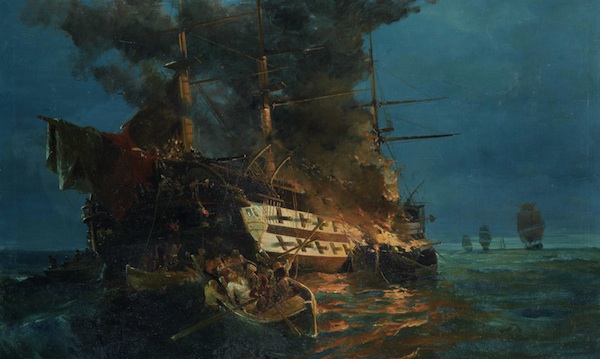 A stand-out work ‘The burning of a Turkish battleship’ by the great 19th Century master of Greek seascape painting and one of the dominant figures of the Munich School, Constantinos Volanakis, is also among the highlights in the sale. The painting depicts a pivotal moment in the Greek Battle of Independence (1821-1929). More precisely, it shows the moment on May 27 1821 when a Greek fireship aimed by one of the Greek’s ablest commanders, Dimitrios Papanikolis, destroyed a Turkish vessel anchored in the bay of Eressos. The success of the venture boosted Greek morale and drove the Turkish fleet back to the Dandanelles, ceding the Aegean to the Greeks. It is estimated at £100,000 – 150,000.

The painting belongs to the great tradition of 19th century European battle painting and is one of three works by Volankis on the theme of epic naval engagements. It has been described as representing his highest achievement in the depiction of naval themes.

The sale overall draws together an extraordinary array of art, with important examples by some of the most influential Greek artists from the 19th century through to the post-war and contemporary periods. Significant works by Theofilos, Theodore Jacques Ralli, Constantinos Maleas, George Bouzianis, Nikos Hadjikyriakos-Ghika, Nikos Engonopoulos, Yannis Gaitis, Thanos Tsingos, Alexis Akrithakis and Alekos Fassianos populate the sale.

Some of the paintings in this sale have been donated by the artists themselves and the proceeds will go to further the work of Greece Debt Free, a not for profit organisation which aims to buy Greek Government Bonds and cancel them, thereby reducing the national debt.

For more information on the sale, please visit the official web page of the Greek Sale at Bonhams.

Bonhams was founded in 1793 and is one of the world’s largest auctioneers of fine art and antiques. The present company was formed by the merger in November 2001 of Bonhams & Brooks and Phillips Son & Neale. In August 2002, the company acquired Butterfields, the principal firm of auctioneers on the West Coast of America. Today, Bonhams offers more sales than any of its rivals, through two major salerooms in London: New Bond Street and Knightsbridge; and a further three in the UK regions and Scotland. Sales are also held in San Francisco, Los Angeles, Carmel, New York and Connecticut in the USA; and Germany, France, Monaco, Hong Kong and Australia. Bonhams has a worldwide network of offices and regional representatives in 25 countries offering sales advice and valuation services in 60 specialist areas. For a full listing of upcoming sales, plus details of Bonhams specialist departments go to www.bonhams.com.