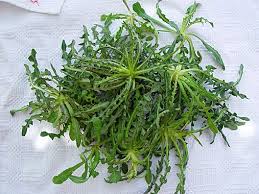 A Cretan variety of wild chicory known as Stamnagathi which grows on difficult to reach mountain areas has received international certification. The Greek Inspection and Certification Body Tuv Hellas, a member of the Tun Nord Group, carried out the first world certification for the herb, based on the protocol Global A.P. V4 for the cultivation company Cretan Gaia, which is already in the process of accreditation for the organic production of Stamnagathi
Tuv Hellas has achieved international recognition of this specific cultivation and supports Greek farmers’ efforts to produce quality products and export them to the international markets.
Cretan Gaia is an innovative agriculture company that produces and distributes Stamnagathi. It is located in the village of Mires, near Heraklion city. The company owns a modern greenhouse unit as well as a large site with open field cultivations.
Cretan Gaia is the largest producer of Stamnagathi in Greece, with a daily production of more than two tons. Combining tradition with science and innovation, Cretan Gaia, while says it respects the island’s wild flora, collects genuine wild seed from the mountains of Crete and then plants it in its own fields.
Stamnagathi is a volunteer plant, which is found in the snowy and inaccessible parts of the mountains of Crete, as well as in some sea cliffs. It is a wild Cretan herb, with serrated leaves, containing a sweet-bitter substance, which gives the plant important properties.
Its antiseptic and antirheumatic properties are known from antiquity and the plant constitutes one of the hidden secrets of Cretan people for well-being and longevity. Stamnagathi is rich in vitamins E and C, omega-3 fatty acids and linoleic acid, the essential oil to get rid of the accumulated fat in arteries. It also has high concentration of calcium and iron.