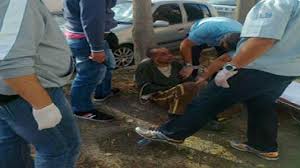 Policemen from a regional department in the prefecture of Ilia found a 22-year-old man from Bangladesh chained by the leg to a metal pole.
The police operation took place on March 30, when authorities were called by some other Bangladeshi friends of the 22-year-old. They told the police that their compatriot was held hostage in a greenhouse which is used as a dwelling by other immigrants.
The nine perpetrators demanded 5,000 euros ransom from the victim’s family in Bangladesh. According to ilialive.gr, the victim’s relatives deposited about 2,000 euros in a bank account in Bangladesh, while the perpetrators took the the money the victim had in his wallet.
Authorities are continuing their investigation to identify the perpetrators and they note a contemporary slave trade being extended. The nightmare for many immigrants – most of whom are illegal – does not end with their arrival in Greece, but still continues as they work to send money to their families.