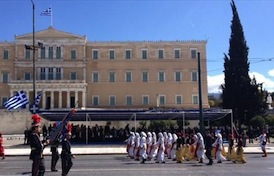 While Greek-Americans and those in the Diaspora around the world were celebrating Greece’s Independence Day, spectators in Athens were barred from a parade as the government, as it did last year, feared embarrassing protests against austerity measures.
Most media avoided coverage of the March 25 day celebration that used to be a highlight of the year and attract scores of thousands of spectators. Greeks responded by essentially boycotting the event that had been a focal point of national pride and freedom.
State-run TV showed President Karolos Papoulias standing in Syntagma Square, home to frequent riots, in front of the Parliament, watching military units and others pass by him in review, with almost no other spectators visible.
Ahead of that celebration, students paraded on March 24 in downtown Athens although police pushed away protesters from the Spitha (Spark) movement created by composer Mikis Theodorakis who wanted to show their disdain for austerity measures and support for Cyprus as that country is dealing with an economic crisis as well.
Protesters at the lower end of Syntagma Square carried a banner that read United Hellenism: Brothers Greece and Cyprus together but police wouldn’t let them into the march. The demonstrators said they were angry that police blocked off the square in front of the Parliament so no dissension against the government would be voiced.
The Athens city center was sealed off by police and squads of riot police were at the ready to stop any attempt at protesting. Last year, the Independence Day parade was similarly blocked off downtown and by invitation only for VIP’s and officials as the government didn’t want images of protests being seen. The main metro station was closed and will be as well on March 25 to make it difficult for protesters to reach the area. 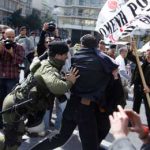 The municipal band was placed where students couldn’t it, or the students so they wouldn’t be able to report on any trouble. When journalists threatened to leave and provide no coverage for the event, the police relented and gave them a more advantageous position. There were reports that even the parents of the children marching weren’t allowed to attend.
The school parade, with the participation of selected schools and colleges, began, in the absence of the Minister of Education, Konstantinos Arvanitopoulos. The government was represented by the Deputy Minister of Education, Theodoros Papatheodorou. The official excuse of the Minister for his absence was that he was at Korytsa for an official visit.