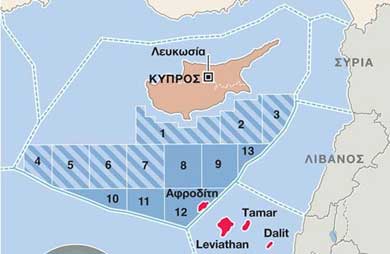 Cyprus’ hopes of using potential gas reserves as a bargaining chip to trigger an international bailout is hitting an obstacle in Ankara as Turkish officials said they may challenge any move to do so, the news agency Reuters reported.
The European Union has given the island’s government until March 25 to find a way to raise or collateralize 5.8 million euros ($7.5 billion) to trigger release of 10 billion euros ($13 billion) in a rescue package to the country’s banks and economy.
Cyprus is in talks with Moscow over possible Russian investments. Cypriot Finance Minister Michalis Sarris has identified the divided island’s offshore gas riches as one area in which Russia could invest.
“This resource belongs to two communities and the future of this resource can’t be subject to the will of southern Cyprus alone. (We) may act against such initiatives if necessary,” one of the Turkish officials told Reuters. “The exclusive use of this resource … by southern Cyprus is out of question … and unacceptable.”
Cypriot efforts to develop as yet undeveloped offshore gas fields and position them as a vital source of energy for Europe have raised tensions with Turkey, which demands a joint approach and a share of the revenue. “We are discussing all legal means … We could take the case to the European Union but we will use all political and legal channels,» the official said without elaborating.
Moscow would tighten its grip on European supplies if it invested in natural gas fields in the Mediterranean south of Cyprus as part of a deal to solve the island’s financial crisis. So far, some 200 billion cubic meters of natural gas worth $80 billion at current prices have been discovered in the Aphrodite gas field in Cypriot waters, although the figures still have to be audited. That would be enough to cover around 40 percent of the EU’s annual gas consumption.
Cyprus hopes to start exporting in 2018, but energy analysts say extracting the gas will prove costly and slow, and Cypriot supplies may run into a global glut, with shale gas plentiful by then in North America, Russia and even Europe, as Reuters noted.