The Greek Influence On Rome 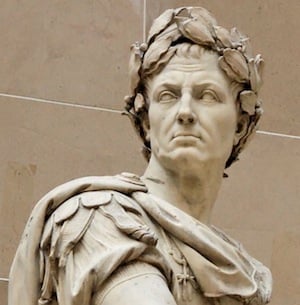 By Dean J. Argyris* – Rome changed the world; there is no doubt of that. They constructed an intricate network of roads that connected Europe and they established the concept of having three governmental branches.  Rome’s role in the world is best demonstrated in the satirical Monty Python’s ‘Life of Brian.’  Specifically, a scene where the People’s Front of Judea and NOT the Judean People’s Front asks, “apart from better sanitation and medicine and irrigation and public health and roads and freshwater systems and baths and public order… what have the Romans done for us?”

March 15 marks the day in 44BC when approximately 60 Roman Senators who were fearful of newly-named Dictator for Life Julius Caesar opted to assassinate him on the Senate floor.

What does any of this have to do with the Greeks?

To this day the Greeks and Italians often point out the similarities between their cultures.  Roman architecture and Greek architecture are strikingly similar. The mythology is nearly the same, though the names are different, both sets of Gods reside on Mount Olympus. Western historians talk about Magna Grecia, a period beginning in the 8th Century BC in which the Greeks colonized what is now known as modern day Sicily, Calabria, Apulia, and Salento.  This could account for some of the similarities.  However, we need only look to the pages of Rome’s own mythology for further insight into the Greek influences on Rome.

In 29 B.C., Publius Vergilius Maro, better known as Virgil, wrote the epic Aeneid.  In the very first stanza, he wrote:

“Expelled and exiled, left the Trojan shore… before he won the Latian realm, and built the destined town; his banished Gods restored to rites divine and settled sure succession in his line. From whence the race of Alban fathers come, and the long glories of majestic Rome.”

The surviving Trojans sailed westward, being told by an oracle to return to their ancestral home. So, they went to Crete.  Finding Crete to inhospitable for them, they moved further west and settled along the Tiber River in Italy. This notion is further enforced in a prophecy that foretells that Carthage will be destroyed by the race descended from the Trojans.

However, the influence doesn’t stop there.  At the height of the Roman Republic and even during the beginning of the Roman Empire under the Julio-Claudian line (from Octavian/Augustus to Nero), if a Roman Patrician wished to reach the highest levels of education, they attended the schools in Greece.  Marcus Tulius Cicero, for example, one of Rome’s leading philosophers, constitutionalists and one of the politicians aligned against Julius Caesar, introduced the ‘common’ Roman to the Greek philosophers by translating many of the texts from Greek to Latin.

Julius Caesar and his general, Mark Antony, were known to have trained their legions in the Spartan manner; idolizing their fortitude.  Caesar and his nephew/adopted son Augustus revered Alexander the Great and during their stays in Alexandria, went to the tomb and paid their respects to the Greek general.  It is even rumored that Caesar wept by a statue of Alexander feeling embarrassed that Alexander had accomplished so much more at a younger age than Caesar.

Greeks also helped protect the Roman Empire during its infancy.  Spartan soldiers were often called up to assist Roman legions in their battles against the Middle-Eastern Parthian Empire.

However, since today marks the day Caesar was assassinated, let us take on a legend; Shakespeare.   Servillius Casca, that man who struck the first blow against Caesar by thrusting a dagger towards his neck cried “adelfe, voethei!”  Causing some 60 Senators to encircle Caesar and continually stab him. Marcus Junius Brutus came up and struck the final blow.  While it’s not certain what Caesar’s last words are, he did not say “E tu, Brute?” Most firsthand accounts seem to suggest that he spoke the Greek words, “kai su, teknon;” Greek for “and you, son?”

The influences continued on under the reign of Constantine I, who moved the capitol of Rome to Constantinople. In doing so, he caused an unspoken rift in the Roman Empire. Rome in the East, beginning with Constantine, became heavily influenced by Greek culture, with Greek becoming the prime language. Eventually it became informally known as “The Empire of the Greeks.” In the west, Latin began to dominate. The Great Schism essentially sealed the deal and the two churches (Catholicism and Orthodox Christianity) were thus born from one. Had the schism not occurred, there would probably have been no Ottoman conquest of Europe and thus no growing division in Theology and we could have found that Greek and Roman cultures would continue to be remarkably similar.

So on this, the Ides of March, let us remember that Greece may have been the first of western civilizations, in its twilight by the time of Rome’s ascension into the known world, but that Greece also was crucial in elevating Rome to the greatness it achieved.

*Dean Argiris is the founder of Argiris Consulting Group, a political consulting firm. Dean has authored and published commentaries on the Greek financial crisis and advocating a third approach to resolving the debacle.