‘Before Midnight’ Director on Greece: ‘I Loved It’ 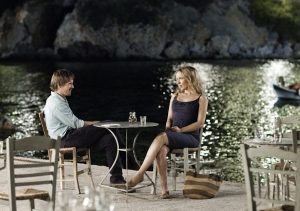 “Before Midnight,” the follow-up to the “Before Sunset” and “Before Sunrise” love story, made its debut at SXSW in Austin, Texas on Saturday night.

The film was shot in Greece by director Richard Linklater, who took part in a Q&A panel following the “Before Midnight” festival premiere at the Paramount. Fielding questions from a packed audience, he was asked, “Why Greece?,” to which Linklater responded, “I loved it…I just had a great feeling.”

The director also discussed the “very intense relationship [of] making [the] movie,” saying it was a “wonderful creative experience.”

Now parents to twins, the third film in the series follows Jesse (Ethan Hawke) and Celine (Julie Delpy) nine years after their last European rendezvous in “Before Sunset.” Jesse is also struggling to maintain his relationship with his teenage son from another woman, Hank, who lives in Chicago with Jesse’s (now) ex-wife and who, after spending the summer with Jesse and Celine on a Greek island, is being dropped off at the airport to fly home. Jesse is still a successful novelist, while Celine is at a career crossroads, considering a job in government.