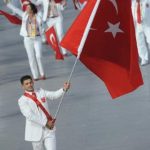 With the selection of a host city for the 2020 Olympic Games down to Madrid, Istanbul and Tokyo and the winner to be named on Sept. 13, Greece has thrown its support behind its neighbor Turkey.

Enemies for 400 years during the Ottoman Occupation, and again almost a centur ago during another war between them, Greece and Turkey have been drawing closer in recent years.

Turkey also said if it wins it would want to keep wrestling, which began in the ancient games but which the International Olympic Committee (IOC) wants to scrap in favor of sports that get more television viewers and appeal to younger people, such as bicycling.

The agreement was signed at the second High Level Cooperation Council in Istanbul where it was one of more than 20 signed between Greece and Turkey at the summit aimed at boosting bilateral relations across sectors like tourism, energy and telecommunications.

The Istanbul 2020 joint declaration committed both countries to “engage in cooperation with regard to the technical and related aspects in the organization of the 2020 Summer Olympic Games” and “explore ways of enhancing the benefits of the Olympics for the two countries” and the entire region if the Turkish city is awarded the Games.

Former Greek Prime Minister George Papandreou had previously promised the country’s support for the Istanbul 2020 bid back in January 2011, but the official joint declaration shows an unprecedented level of commitment from Greece.

“The ties between Turkey and Greece have been strengthened thanks to the power of the Olympic Movement to build bridges,” said Istanbul 2020 bid leader Hasan Arat, who attended the signing ceremony.

Lone Wolf Spotted Swimming in the Sea Off Greece