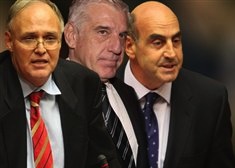 Greece’s intensified crackdown on corruption, which has already led to  life sentence for a former mayor and eight years in jail for a former intensified has now reached three more ministers who have been charged with failing to report the source of their wealth, according to a prosecutor.
With public rage rising over politicians and the rich escaping the country’s crushing economic crisis and harsh austerity measures that have pushed 20 percent of people into poverty, the coalition government led by Prime Minister and New Democracy Conservative leader Antonis Samaras is cracking down hard on wrongdoing, ensnaring politicians from his own party and the PASOK Socialists, one of his administration’s partners.
Among them is Yannos Papantoniou, a prominent Socialist politician who was finance minister when Greece joined the euro in 2001. He faces misdemeanor charges for failing to disclose in 2008 that his wife had 2.2 million euros ($2.85 million) in deposits in a Swiss account of the HSBC Bank, where another 2,062 Greeks have $1.95 billion in hidden monies that still hasn’t been checked for possible tax evasion.
Former Public Order Minister George Voulgarakis, 53, was also accused of hiding from the state that his wife had deposits of 117,000 euros ($152,000) in a foreign bank account in 2007. The country’s international lenders are ramping up the pressure to go after tax cheats who hide their assets.
Papantoniou and Voulgarakis both denied the charges, which stem from a probe into the so-called “Lagarde list” of potential tax evaders published that sparked an outcry among Greeks angry at a wealthy elite partly blamed for dragging the country to the brink of bankruptcy. It is named for former French finance minister Christine Lagarde who gave the HSBC list to former finance minister George Papaconstantinou in 2010. He is being investigated after it was discovered the names of three of his relatives were removed.
Papantoniou and Voulgarakis told a parliamentary committee that lis ooking into the Lagarde list that the accounts belonged only to their wives. Former Deputy Finance Minister Petros Doukas, a member of the ruling conservative party, was also charged with felony after the prosecutor refused to accept his explanation over the disappearance of 1 million euros ($1.29 million) from his bank account in 2010, court officials said.
Doukas, 60, has denied any wrondoing. He has said the money was transferred to an investment account, which was declared in his income statement. Greek politicians are required under law to declare the origin of their wealth after Parliament toughened legislation in 2010 soon after its debt crisis erupted.