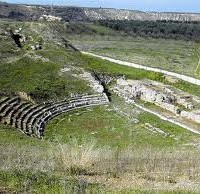 The Hellenistic theatre at Sicyon was built between 303 and 251 BC and was altered at least twice by the Romans. The scene building was expanded in the 1st century and the stage was altered in the late Roman period. With a seating area estimated at 122 meters wide and 58 meters deep, it is one of the largest theaters in the Peloponnese.
The present day ruins at Sicyon are a faint reminder of the Romanized theatre Pausinias visited in the second century CE.
As of Feb. 20, the monument has been re-introduced into a restoration program, targeting at the protection and enhancement of its initiate identity, as the members of the Central Archaeological Council agreed to schedule the work required. Due to the structural and morphological problems of the theater, a working group of the 17th Ephorate of Prehistoric and Classical Antiquities proceeded to restoration proposals.
The group will estimate the problems and make a diagnosis. The necessary funds have been given by the regional unit of Corinth and Sikyon, and reach the amount of 200,000 euros. The Diazoma Association will undertake enhancement and restoration and donate 10,000 euros, hoping to be increased with new donations. After this, the works will continue for the disclosure, protection and restoration of the theater.