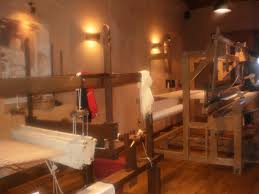 The silk production in the Greek city of Soufli has a long history dating from Byzantium ages. The families of Soufli which were involved with the silk industry could not even imagine that this “noble” raw material would be widely used one day.
Soufli is the only city in Greece and Europe to be involved with the silkworm rearing and processing of yarn taken from the cocoon. Silk produced in Soufli is of high quality, often considered better than the Chinese. This fact combined with the European monopoly gives a great perspective on the region of Soufli.
The Eastern Region of Macedonia and Thrace is working on a new co-operation with the Secretary General for Rural Development of Greece, Dimitrios Melas, to promote its prized product.
Soufli is showing off its silk in several exhibitions and museums. The older Silk Museum in Soufli (Thrace) belongs to the Museum Network of the Piraeus Bank Group Cultural Foundation (PIOP). It is housed in the Kourtidis Mansion (1883) and was set up in 1990. The purpose of the permanent exhibition housed on the ground floor of the Kourtidis Mansion is to show the pre-industrial techniques by which silkworms were bred (sericulture) and silk was woven.
The first exhibition unit relates the history of silk over time, beginning with China, continuing through Greek and Roman antiquity and Byzantium and covering both the West and the Ottoman period. The second exhibition unit has as its theme the stages in the breeding of silkworms from the production of the “silk-seed” to the suffocation of the cocoons.
The third exhibition unit is devoted to the manufacturing of silk, from the cleaning and sorting of the cocoons to the weaving of the fine silks which Soufli once produced. The fourth exhibition unit deals with the broader socio-economic background against which silk-weaving developed in Greece and the rest of Europe in the nineteenth and twentieth centuries, with particular emphasis on the rise and decline of the silk industry in Soufli and its contribution to the development of the town. The printed matter on the Silk Museum consists of a leaflet/poster and a monograph entitled Sericulture in Soufli.
A more recent addition to the silk museums in Soufli is the Art of Silk Museum belonging to the Tsiakiris Family Silkmills. Opened in September 2008 in a renovated Neoclassical building (1886) on the main thoroughfare of the town, it displays the full sequence of sericulture (with live silkworms on show most of the year).
It shows the more industrial side of silk manufacture and weaving incorporating fully functional machinery and exhibits from the Tsiakiri factory and videos of the various stages and methods of production. It features both live and electronically assisted guided tours (available in several languages).