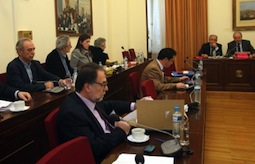 A CD containing the names of 2,065 Greeks with $1.95 billion in secret accounts in the Geneva, Switzerland branch of HSBC that hasn’t been checked for tax evasion suspects for 2 1/2 years was given to a parliamentary committee investigating the removal of the names of three relatives of former finance minister George Papaconstantinou.
The committee is trying to determine if he doctored the list, which he has denied. It is known as the Lagarde List because he received it from then French finance minister Christine Lagarde, now head of the International Monetary Fund, one of Greece’s international lenders. She said it came from a larger list of depositors in a number of countries who were being vetted for tax evasion.
The CD, forwarded by French authorities, was delivered to the MPs in the presence of two police officers from the criminal investigations department. The new CD was dispatched in order to verify its contents against the original CD given to Papaconstantinou, who said it went missing.
Giorgos Angelopoulos, a former close aide of Papaconstantinou,  testified that a CD handed over to him by the former Finance Minister contained a different file format compared to the original CD sent by the French authorities.
While Papaconstantinou’s successor as finance minister, current PASOK Socialist leader Evangelos Venizelos, also had a list, Parliament decided not to investigate him. His party is one of the two coalition partners in Prime Minister Antonis Samaras’ government.