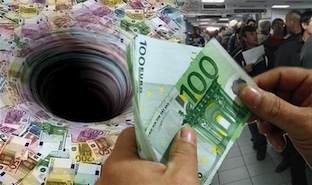 Because of austerity measures and even as it’s pressing Greece’s coalition government to go after tax evaders who owe more than $70 billion, the country’s international lenders have admitted that 80 percent of the country’s debt can’t be collected for a number of reasons, leaving it to workers to pay the freight.
The inefficiency of Greece’s tax collection mechanism combined with the inability of people to pay because of repeated pay cuts, tax hikes and slashed pensions resulted in 12 billion euros ($15.89 billion) in uncollected debts in the first 11 months of 2012, up up 1 billion euros ($1.32 billion) over the same period in the previous year.
It’s likely to get worse instead of better as new pay cuts, tax hikes and slashed pensions kicked in on Jan. 1 and with a $17.45 billion spending cut and tax hike budget plan approved for 2013-14 as tax evaders continue to skate free.
Finance Ministry data shows that the combined total of both old and new debts to the state now stands at 55.5 billion euros ($73.41 billion) and much of it may not be collected. The ministry found that 1.13 million periodic statements for Value-Added Tax (VAT) for the first 11 months of 2012 have not been submitted by enterprises and the self-employed, which means that they have withheld the VAT received from customers for sales made or services provided and not paid it to the government.
Old debts amounted to 43.49 billion euros ($57.6 billion) some 2.99 billion euros ($3.95 billion) of which concerns state companies and corporations. Another 8.5 billion euros ($11.25 billion) concerns firms that have already gone bankrupt while the remaining 31.8 billion euros ($42.1 billion) relates to various taxpayers and enterprises. The state has only managed to collect about 1 billion euros of this old debt, while writing off some 359 million euros ($523.1 million).
The new debts, recorded in 2012, amount to 12.07 billion euros ($15.98 billion) and are expected to steadily increase. The state has only managed to collect 1.1 billion euros ($1.45 billion) of this new debt and has written off another 179 million ($237 million.) The total of 2.19 billion euros ($2.89 billion) cashed in satisfies the requirement set out in the government’s bailout agreement with its creditors.
The Troika recommended that the government should open debtors’ banks accounts and automatically withdraw the amounts that taxpayers owe to the authorities even if it leaves people without any money to live on. Many Greeks though, especially the rich, don’t use Greek banksbut hide their money in foreign bank accounts, including in Switzerland, which refuses to give Greek officials their names. The Troika also said the government should review it policy for writing off debt and not be as lenient, even if people can’t pay.
(Source: Kathimerini)