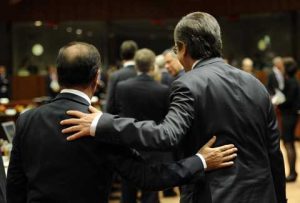 Greek Prime Minister Antonis Samaras was in Brussels on Nov. 22 for the start of a two-day meeting of European Union leaders on the region’s budget where he was expected to meet Eurozone chief Jean-Claude Juncker and push for a long-delayed $38.8 billion loan installment to be released.
Eurozone finance ministers earlier in the week delayed until Nov. 26 a decision on the loan because of a dispute with International Monetary Fund Managing Director Christine Lagarde, who is opposed to giving Greece a two-year extension to meet its fiscal targets.
EU leaders want to push back the deadline to 2022 for Greece to reduce its debt-to-Gross Domestic Product (GDP) ratio from nearly 180 percent now to 120 percent, but that could require additional aid, which Lagarde doesn’t want to give.
The IMF, along with the European Union and European Central Bank, make up the EU-IMF-ECB Troika that loaned Greece $152 billion starting in 2010 through a series of rescue monies, but has withheld the first installment in a second bailout of $173 billion.
Samaras, frustrated that he narrowly convinced the Parliament that his coalition government controls to pass a $17.45 billion spending cut and tax hike plan as a condition of getting the money, called on the Eurozone and IMF head to settle their differences. He warned that unless Greece gets the funds that it could be pushed toward default and risk the integrity of the financial bloc itself.
“Greece did what it had to do and what it had pledged to do,” Samaras said. “Our partners, and the I.M.F., must now assume their responsibilities.” He added that, “Whatever the technical difficulties involved in finding a solution, they do not justify any negligence or delay.”
The Troika officials will meet again in Brussels on Nov. 26 to discuss Greece, and were expected to also talk about the country’s economic problems on the sidelines of a two-day meeting in the EU’s capital Nov. 22-23, where Samaras plans to talk to Juncker.
Meanwhile, German Chancellor Angela Merkel, whose country is the biggest contributor to the Greek bailouts despite opposition from Germans, said she believes the loan will be disbursed next week. She has continued to insist, however, on more of the austerity measures that have worsened Greece’s five-year recession. “We want Greece to remain in the Euro,” she said.
Wolfgang Schaeuble, the German Finance Minister, said he was confident that an agreement could be reached once “technical questions” had been clarified. If ministers do reach a deal, Greece is likely to get a larger amount of about 44 billion euros, ($56.6) because two additional installments are due by the end of the year under terms of the second bailout and Greece wants the monies bundled together.
The loans have been on hold since June, when Samaras’ New Democracy Conservatives narrowly won a tense election, and creditors determined that Greece was failing to meet the conditions of the bailout.
Eurozone finance ministers are considering a range of options, including lowering interest rates on Greek debt, lengthening the deadlines for repayments and allowing Greece to buy back its bonds at a steep discount. Once lenders agree on a solution for Greece, the measure will still have to be debated and passed by German lawmakers.