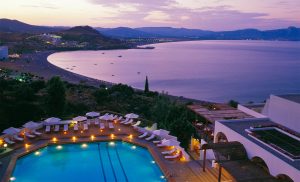 Rhodes Lindos Blu Hotel is the first brand new luxury Greek hotel to tops the list Hot Hotels 2012 published in the number one weekly tourist magazine Travel Weekly UK. It was voted as the best boutique hotel in the world.

For the hotels’ evaluation, travel agents of UK’s biggest trade associations were asked to select and highlight the 10 hotels into different categories, that most excited their customers.

Among the best world accommodations, Lindos Blu Hotel won the tourism professionals’ vote in the Boutique hotels category because of his hospitality,the meticulous and unique aesthetics and the high level of service.

Among other names that ranked high were Sandy Lane in Barbados, Burj Al Arab in Dubai, Bellagio in Las Vegas as well as avant-garde chains such as One & Only and Four Seasons.