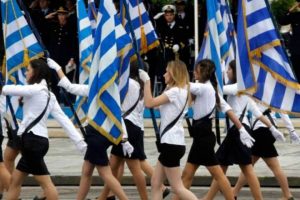 An Albanian girl who had achieved the highest grades at a Greek school in Farsala, earning the right to carry the Greek flag in a parade, declined to do so after it was reported her classmates didn’t want her to have the honor because she wasn’t Greek, and said they would threaten her and the school’s principal with the neo-Nazi group Golden Dawn.
The student council informed Principal Kostas Panos that she should be denied the honor she had won. He checked with the Head of Secondary Education of Larissa and asked for directions and was told to let her carry the flag.
But the girl refused because, as she said, ”respects the flag, the principal, her professors and clasmates and not because she is afraid.” Similar incidents have happened before in Greek schools where immigrants earn the highest grade over Greek students who don’t want them to be celebrated for their achievement.