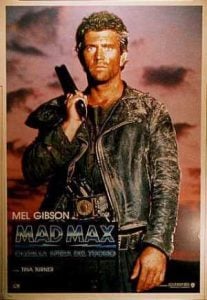 Greek-Australian director George (Miliotis) Miller’s plan to film a new episode of the Mad Max series and character he created and which helped make Mel Gibson famous, has hit a roadblock with delays in shooting in Namibia.

The studio producing it, Warner Brothers, has sent a representative to the African country to investigate the problems in the schedule for the fourth film in the series, this one called Fury Road. The film has a budget of more than $100 million.

The Mad Max trilogy was filmed an area in Australia known as Broken Hill, that was mostly desert but persistent rain has turned it into a green pasture, covered with flowers. Before heading to the set earlier this year, cinematographer John Seale told Fairfax how excited he was about resuming the cult series that depicts a warrior class in a post-apocalyptic Australia.

Warner Bros’ decision however to film in Namibia disappointed Australians and the country’s film industry and it forced Miller to lay off part of the staff working in the film production company. It has been 33 years since the first film and there will be another chance that may not make the franchise’s fans happy: Gibson, now 56, is being replaced by British actor Tom Hardy, 35, to play Mad Max.