Katakolo's Museum: Ancient Greece Ahead of its Time

The Ancient Greek Technology Museum of Kostas Kotsanas in Katakolo, Pyrgos, Greece, hosts the most comprehensive exhibition of its kind in the world, shedding light on a lesser-known area of expertise of the ancient Greeks: science and technology. Some 300 operating models of ancient Greek inventions covering the period from 2000 B.C. until the end of the ancient Greek world are permanently exhibited in the Museum (from the robot – servant of Philon to the cinema of Heron and from the automatic clock of Ktesibios to the analog computer of Antikythera).
The museum primarily aims at highlighting this relatively unknown aspect of ancient Greek civilization and to prove that the technology of the ancient Greeks, just before the end of the ancient Greek world, was similar to the beginnings of our modern technology. The bolts and nuts, gears and rules, pulleys and belts, sprockets and chains, block and tackles and winches, hydraulic controllers and valves are just some of the inventions of the ancient Greeks, which were the foundations of their complex technology. Exploring this era in light of the high technological achievements developed more than 1000 years ago proves just how much the modern Western Civilization relies on the ancient Greek creativity and scientific knowledge.
Many of the exhibits and research studies, upon which the constructions were based, have been presented at international conferences and exhibitions, while several temporary exhibitions of the museum have been held in both Greece and abroad. Entrance is free to everyone including school students who have the chance of receiving a detailed tour of the exhibition by its creator personally. Approximately 10,000 students per year and dozens of foreign universities and schools come to visit the unique exhibition, while the museum survives on donations from visitors and without any funds or sponsorhips by any private or public institution.
The exhibition has attracted the attention of foreign news agencies, such as the German periodical FOCUS (which made a flattering note of the museum in its otherwise infamously degrading article about Greece), while the museum has also been featured as one of the Top 10 destinations in the Peloponnese by the renowned German language travel guide Peloponnes of Dumont Editions.
Next to the Ancient Greek Technology Museum operates the Museum of Ancient Greek Musical Instruments and Toys & Games under the auspices of the Municipality of Pyrgos. This museum exhibits 42 ancient Greek music instruments and many games with detailed descriptions that are based on the personal research and constructions of Kotsanas. The instruments are fully functional and their construction is designed according to the pot illustrations. The exhibits are accompanied by rich audio-visual material (in Greek and English), while many of them are interactive. 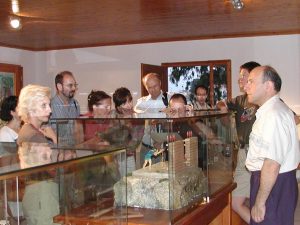 The exhibition (categorized in thematic units) follows the modern educational perception in Pedagogic and Museum Education so that it acts multi-leveled as far as ancient Greek technological thought and technique is concerned.
Currently the Museum presents a temporary movable exhibition entitled Ancient Greek Technology: The HI-TEC inventions of the ancient Greeks, which will travel across the country and abroad to showcase the most important inventions and technological equipment of ancient Greece. The exhibition is currently hosted at the Municipality of Ancient Olympia.

Konstantinos Kotsanas was born in 1963 in Aigeira, Achaia. He studied in the Department of Mechanical Engineering at the Polytechnic University of Patras where he graduated in 1986. Since 1991, he has been working as a permanent teacher in the Secondary Education (and since 2003, as Director at the Second Chance School in Pyrgos.)

Also, in the SPAP Conference Centre Z Department for Prehistoric and Classical Antiquities of Ancient Olympia with the support of the Ministry of Culture and c) the Conference Centre of the University of Patras with the support of the University and the Prefecture of Achaia,  the Municipal Market of Pyrgos (archaeological museum) under the auspices of the Prefecture of Ilia, etc.