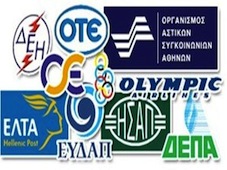 Greece plans to launch tenders to sell or lease a string of state assets, including its biggest refiner and two largest ports, as it battles to pay down debt and meet the terms of an international bailout.
The deals will be a second round of long-delayed privatizations after six projects which are expected to be done in early 2013.
“We have some very significant assets and tenders to launch in the next few months,” Yannis Emiris, head of Greece΄s HRADF privatization agency told a conference on Oct. 16.  Athens plans to launch tenders to sell stakes in refiner Hellenic Petroleum, the country΄s two biggest ports in Piraeus and Thessaloniki, its second-biggest water company, Thessaloniki Water, and Larco, one of the world΄s biggest nickel producers.
The country also plans to seek investors for the country΄s biggest airport in Athens, the Egnatia motorway as well as small regional airports and marinas. Privatizations are a key part of Greek efforts to pay down debt and return from the verge of bankruptcy. Under the terms of its EU-IMF-ECB Troika bailout plan, Athens is supposed to raise 19 billion euros ($25 billion) by the end of 2015 and about 50 billion euros ($65.1 billion) by 2020 under its asset sale programme.
But Greece has already missed several revenue targets, having raised only about 1.6 billion euros ($2.08 billion) in cash since its first bailout in May 2010. The lack of progress stems from the reluctance of Greek governments to sell, political instability and little investor interest amid a debt crisis and fears the country might exit the euro.
The country΄s new coalition government under Prime Minister Antonis Samaras has pledged to revive privatizations. Last month it signed a deal to lease a shopping mall in Athens and it plans to sell the state lotteries agency by November. The first big sales, natural gas firm DEPA and a 33 percent stake in gambling firm OPAP, are expected to be completed early next year.
Apart from reducing debt, Greece hopes the privatization program will create about 60 billion euros ($78.15 billion) in investments, 50,000 jobs and 3 billion euros ($3.9 billiion) in annual tax revenues, boosting Gross Domestic Product (GDP) by one percentage point each year, Emiris said.
(source: Reuters, Capital)