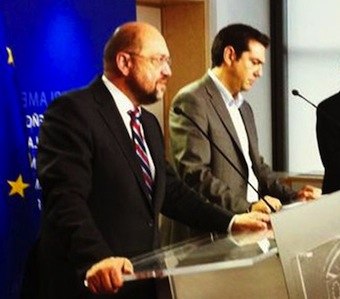 Greece’s main left-wing opposition leader Alexis Tsipras called Thursday for a one-off international conference to write off Greek debt similar to a 1953 London deal on German war reparations.
Tsipras made the call during a press conference at the European Parliament, warning that a third and even possibly a fourth Greek EU-IMF bailout for Greece was “unavoidable” if they continued “dead end” austerity policies.
“The solution we propose is a European conference on debt, as happened in 1953 for the Federal Republic of Germany,” said Tsipras, who heads the Syriza party.
The 1953 accord covered the balance of war reparations imposed in 1919 after World War I as the United States and many other countries including Greece wrote-off much of the debt and eased payments, with the last coming in 2010.
“Greece was one of the countries that agreed a 60 percent reduction in German debt,” Tsipras noted, adding: “We need some kind of new Marshall Plan — we need a change.”
The post-World War II Marshall Plan led by the United States provided a devastated western Europe with massive funding to aid recovery, laying the basis for the prosperity and security of later years.
Tsipras said it was “evident that all EU member states should participate” in this conference, not just the eurozone, as well as private investors, because “the common currency is the only way forward.”
There had to be change, he said, because the “deadly medicine” of austerity over the last three years meant that nearly all bailout funds were “only going to save Greek bankers who created the debt in tandem with European bankers.
“We are discussing whether we should have a third haircut of the debt. Let us start talking about something we can do so as not to reach a fourth — because the third is unavoidable.”
(source: AFP)