Icarus and Daedalus to Re-appear in Tehran 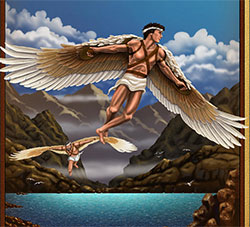 Iranian director Homayun Ghanizadeh plans to stage a play in Iran that he has written based on the Greek myth of Icarus and Daedalus, bearing that title. The performance will be held on Sept. 21 at the Hafez Hall, the Rudaki Foundation, the owner of the hall, announced in a press release.

The play brought Ghanizadeh the Best Director Award at the 25th Fajr International Theater Festival in 2006. He had staged the play at Tehran’s City Theater Complex at the time. Hamidreza Naimi and Javad Namaki will star in the play.

Daedalus was a mythical Greek architect and sculptor, who was said to have built, among other things, the paradigmatic Labyrinth for King Minos of Crete. Daedalus fell out of favor with Minos and was imprisoned. He fashioned wings of wax and feathers for himself and for his son Icarus, and escaped to Sicily.

But Icarus flew too near the sun and his wings melted. He fell into the sea and drowned. The island on which his body was washed ashore was later named Icaria. Arash Sepahsalar and Saeid Movaffaqnejad are the theatrical production’s stage designers. Ghanizadeh has recently staged Antigone with an Estonian troupe at Tehran’s Iranshahr Theater Complex.