Dimitriou a Greek Link with Merkel On Greece’s Debt 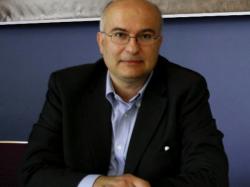 He’s not the Greek Prime Minister, but Costas Dimitriou, President of the Association for the Greek Communities of Germany, sees German Chancellor Angela Merkel every three months in Berlin to have some serious talks about Greece. They discuss Greece’s financial problems, while Dimitriou has reportedly made efforts to explain to Merkel that Greeks have done all they could to help improve the country’s sagging economy.

In March, when international media reported that Greek people were lazy, Dimitriou did not hesitate to remind Merkel that “her politics should take into serious consideration the Greek problem’s social aspect as well.”

Apart from his role in the Greek community, Dimitriou, who comes from the Pigadoulia area in Thesprotia prefecture, Epirus, is also an assistant professor at the University of Cologne. He sits at the table with Merkel, Finance Minister Wolfgang Schaeuble and other German ministers often to discuss immigrants’ problems in Germany. Merkel has established a so-called Integration Council concerning immigration issues.

Dimitriou says that the general climate has changed a lot after Greek Prime Minister Antonis Samaras’ visit to Berlin. The country’s media refer to Greece in a more polite and generally better way. “However, most Germans still believe that their money given to Greeks go wasted and they often say that Greece should exit the Eurozone. Moreover, the word fakelaki (meaning an envelope with a bribe) is often told among them all over the country pronounced in the Greek language, concerning the loans. We are fighting to convince Germans that Greece’s image presented by the media is not the right one,” he said.