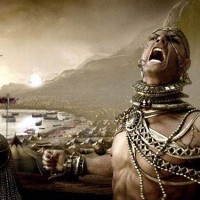 The sequel to the Spartan battle epic “300” has a new title. Originally known as “300: The Battle of Artemisia,” the follow-up to the original film will now go by “300: Rise of an Empire.”

Focusing on the rise to power of Persian leader Xerxes (Rodrigo Santoro reprises the role), the plot will be based on Greek general Themistocles’ (played by Sullivan Stapleton) fight against the Persians. Eva Green returns as Artemisia, which perhaps is the reason the film was renamed – so as to avoid confusion whether the battle was over her.

Gerard Butler is not returning for the second film. Playing the Spartan leader in “300” helped him shoot to stardom, but he passed on bringing his character back to life for “Rise of an Empire.” There is also a new director at the helm, Noam Murro, who has previously directed one feature film, “Smart People.”

The sequel is expected to hit theaters in the summer of 2013.

The Metropolitan Who Blessed the Greek War of Independence

The name of Palaion Patron Germanos may not be the first that comes to mind in the Greek War of Independence, yet he was the one who sealed the uprising
Business