‘300’ Sequel Battles on Without Gerard Butler 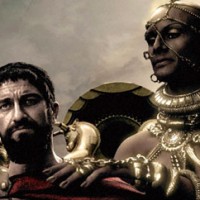 “300: The Battle of Artemisia” will not feature Gerard Butler’s epic portrayal of King Leonidas from the first film. The actor confirmed via an interview with MTV that he will not return for the sequel to the blockbuster hit.

During the interview, Butler told the news site, “Oh yeah, I’m not doing it…They’re filming [the ‘300’ sequel] right now. I wish them the best, but it didn’t [work out]. It wasn’t really my thing.”

“The Battle of Artemisia” stars Eva Green and Rodrigo Santorio, with the plot revolving around the invasion fought by the Greek city-state alliance as the Persian Empire moved in during 480 BC. It will also touch upon how Persian leader Xerxes managed to become the God King, as well as his battle with Artemesia (played by Green) and Themistocles. There may be a storyline included on the Battle of Salamis, which took place when the Persians occupied Athens.

The film is currently shooting and is scheduled for release in 2013.

Greece reopened high schools on Monday after five months, after authorities made available home-testing kits that could control the pandemic.
Art