GRNews
GreekReporter.comGreeceMonastiraki: Bargaining for the Past at Athens' Flea Market

Monastiraki: Bargaining for the Past at Athens' Flea Market

A man in a suit and bowtie is standing next to a 1950’s car in a faded black-and-white photo, a remnant from someone’s past, tossed on a table under a row of wooden shoe molds, next to a ship wheel clock, a tarnished silver cup and an incongruous piece of wooden African art.
In the midst of Greece’s economic crisis, the Sunday Athens flea market in the Monistiraki area is a busy place, even though it has to compete with a battalion of illegal immigrants selling cheaper goods on the streets nearby. It’s a place where you can wander for a long time, circling tables, looking for bargains.
Efrossini Eliopoulou, 58, was there looking for an antique mirror, but got caught up browsing table after table of valuables mixed with junk and the remainders of people’s forgotten lives. “I wanted something with old world charm to accentuate my house, something timeless that could fit into the present day, like a link from the past,” she told Southeast European Times.


She found objects that reminded her of her childhood – a jewelry box, a decanter and a white porcelain chocolate holder. The asking prices are not cheap: 200 euros for old typewriters, 300 euros for a gramophone. “I hope these people didn’t have to sell them in despair because the sentimental value is more than the nominal value,” she said.
The sellers are canny and experienced. A Roma woman sits quietly smoking at her stand, waiting amid garish art with ornate frames, her change purse at the ready. At one table, a collection of old porcelain dishes and vases lies atop a pile of toy cars and fire trucks, samurai swords, a golden bell and an Egyptian mask.
The customers are often regulars with a keen eye. Aikaterina Bouka stopped at a table of porcelain goods operated by Maria Papadopoulou and said she comes because the market offers many high-end goods mixed among the bric-a-brac.
“I like antiques and sometimes there are exceptional opportunities,” she told SETimes. Papadopoulou said she buys from people who are reluctant to give away memories but sometimes have little choice, especially in the crisis. “Many say, ‘This belonged to my mother or grandmother,’ but now they just sell what they don’t want anymore,” she said. 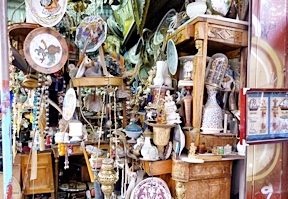 Many want others’ discards. Josianne Den Ruyter of Belgium and her husband were looking for roof ornaments and found a ceramic piece they bought, and had their eye on more personal items at a table full of someone’s memories. “It’s more valuable that it was treasured by someone,” she said.
You can get almost anything you want at the market, including Greek Army Korean War helmets and canteens and leather courier bags sold by Andreas Tsoulis, 42, at an old military goods stand. His friend, George Rigalis, a former member of the Greek Army Special Forces who restores military items, said the customers for the goods are usually men.
“They are looking for something special that reminds them of the military,” he told SETimes. At the flea market, you might find that mirror that someday will be back here, being cherished by someone else who wondered who owned it.
(Reprinted by permission of Southeast European Times, www.setimes.com)