De Niro, Travolta and Brangelina Vacation Together in Halkidiki 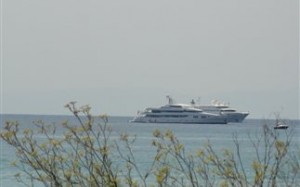 Hollywood celebrities Robert de Niro, John Travolta and the famous couple Angelina Jolie and Brad Pitt are having long a Greek vacation, it appears. Having visited Pylos in the Peloponnese, Mykonos, and Santorini, the popular gang chose the Halkidiki area in northern Greece to spend some more relaxing days.

During the past few days, four luxurious yachts approached the seaside of the Kassandra region in Halkidiki, reportedly carrying the Hollywood stars among their clientele. The actors and actress left their private yachts long enough to tour the Posidi area where they chose a local tavern to have a meal, although customers couldn’t help but stare. Pitt and Jolie said they would visit Santorini but made clear they don’t intend to get married just yet.

While tourism is suffering in Greece this year because of the economic crisis and recession, Hollywood stars as well as those from the United Kingdom still see the country as a popular vacation spot with many buying up property and spending much of their summer here.