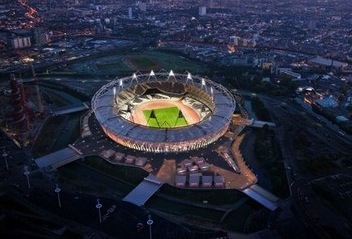 2. Parade of Athletes: Immediately after the Parade of Flags, participating athletes parade through the Olympic stadium, in no particular order. Sometimes the athletes choose to walk together in small groups by team, by sport, or with friends — old and new. This tradition is symbolic of multi-national friendship.
Fun Fact: Symbolic of multi-national friendship, the television era often shows close-ups of the athletes mingling and having fun during the parade and throughout the Closing Ceremony events.

3. Final Medal Ceremony: The International Olympic Committee (IOC) decides which sport and event to award medals to during the Closing Ceremony. For the Summer Games, it is typically the marathon.
Fun Fact: In earlier Olympic times, all medals were awarded during the closing ceremony.

5. Declaration of Closing and Olympic Flame Extinguishment: The most dramatic of all Olympic Closing Ceremony events, the IOC president gives a closing speech and declares the Games officially closed and the Olympic flame is doused.
(source: yahoo sports)