GRNews
GreekReporter.comGreeceMolon Labe: Anniversary of the Battle of Thermopylae (480 BC)

Molon Labe: Anniversary of the Battle of Thermopylae (480 BC) 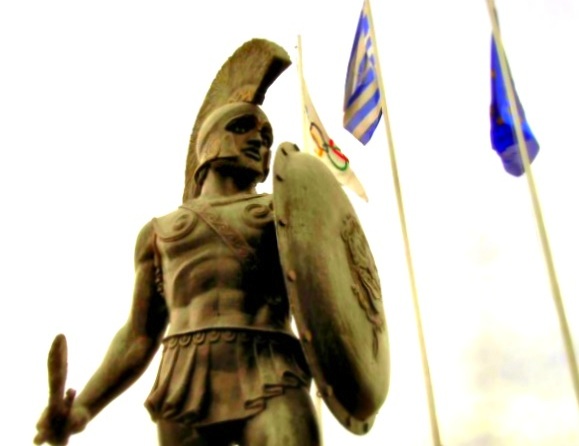 Today is the anniversary of the Battle of Thermopylae (480 BC), one of the most famous battles in history . King Leonidas of Sparta said the phrase Molon Labe (means “Come and take them” in ancient Greek) to Xerxes I of Persia 2492 years ago when the Persians asked the Spartans to lay down their arms and surrender.
Instead, the Greeks held Thermopylae for three days and, although they were ultimately annihilated, they inflicted serious damage upon the Persian army, and most importantly delayed its progress to Athens, providing sufficient time for the city’s evacuation to the island of Salamis. Though a clear defeat, Thermopylae served as a moral victory and inspired the troops at the Battle of Salamis and the Battle of Plataea.
A Heroic sacrifice:
A Greek force of approximately 7,000 men marched north to block the pass in the summer of 480 BC. The Persian army, alleged by the ancient sources to have numbered over one million but today considered to have been much smaller (various figures are given by scholars ranging between about 100,000 and 300,000), arrived at the pass in late August or early September. Vastly outnumbered, the Greeks held off the Persians for seven days in total (including three of battle), before the rear-guard was annihilated in one of history’s most famous last stands.
During two full days of battle, the small force led by King Leonidas I of Sparta blocked the only road by which the massive Persian army could pass. After the second day of battle, a local resident named Ephialtes betrayed the Greeks by revealing a small path that led behind the Greek lines. Aware that his force was being outflanked, Leonidas dismissed the bulk of the Greek army, and remained to guard the rear with 300 Spartans, 700 Thespians, 400 Thebans and perhaps a few hundred others, the vast majority of whom were killed.
Watch the videos below from a History Channel documentary about the Battle of Thermopylae: